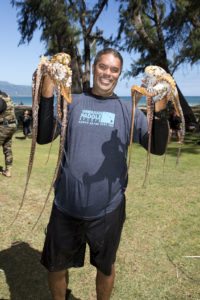 The tournament had 268 diver entries, and 228 oama fishermen.

Hillen’s four-pound, 6 ½ ounce tako was the biggest of the 77 that were officially weighed-in. The 49-year-old Maui County lifeguard patrols Kanaha and had never placed in the ten years he had competed.

“Finally man, I’m finally on the board, I get my name on the plaque,” Hillen said. “I usually work weekends, but I take off for this every year.”

He also caught a 3-pound, 4-ounce octopus that would have also been a top ten catch.

“I caught that one first on the outside,” Hillen said. “I was thinking I would put that one on the scale and hope for the best. The big one was way inside up by Kooks Beach. Lots of guys passed over the thing.”

With 13 minutes left in the tournament, Jarrett Nanod had a tako that looked like it would overtake Hillen, but it came up short, weighing in at 4 pound, 4 ounces.

“I got it outside the breakers, the second reef,” Nanod said. “I had a little grin on my face, I thought I might be able to place for the first time in seven years of doing this tournament.”

Titus Rodrigues, a junior at King Kekaulike, was the youngest to place in the top ten. His 3-pound, 4 ounce catch put him in ninth place. Rodrigues plays football and basketball for the Na Alii.

“My goal was just to relax and enjoy the weekend,” Rodrigues said. “I’ve been pretty busy with a lot of practice and we just got back from playing a team in Japan.”

Shannon Sherman, a 17-year-old from Redondo Beach, California, caught a 12.4 centimeter fish to win the 13 and over oama division. Three-year-old Gary Enoki, of Wailuku, had a winning fish of 12.2 centimeters to claim the 12 and under oama class.

The free tournament was sponsored by the Maui Boardsailing Association.